I was just wondering if I could have your guys' help creating a "relaxing" playlist. Not for yoga- not that kind of meditative relaxation (I don't need whale calls and stuff), but more for just going for a long walk. I'm sure a lot of my paleo peeps go for long walks, so if you could share some tracks that you find relaxing to listen to while walking it would be helpful.

Currently, the first song on the playlist is "Fields of Gold" by Sting.

Nice list! Some I love, and some I need to check out. Thanks! (Listening right now to "June Hymn" from the Decemberists)

Since you have Spotify you could take a look at my Classical/Relaxation playlist: http://open.spotify.com/user/god0fgod/playlist/7cEmLbekkuQlS5CjLIrnGV

@ CD: Cool man thanks. I just checked them out. Portuguese. interesting. Not bad.

I have Spotify premium and I tried the "feilds of gold" radio but it's really not very good. Probably this is because fields of gold is the only Sting song I actually like. haha. But I used that as an example because it's famous enough that people know it and can probably understand the type of "vibe" i'm looking for. None of that yogi crap they play in studios haha. no offense to any yogi's that might read this.

If you like to walk or workout with music in your ears, you might want to check out Spotify and become a "premium member." You could then create a radios station based upon that song after installing the spotify app on your smart phone.

someone around here often suggests GNR. I forgot who it was though...

you must check this one out :)

Instrumental but speaks volumes! Its so positive and uplifting. Reverberates and echos the beauty and magnificence of nature to me... nuthing like it on a sunny summers day. Culminates exquisitely.

:) followed by this one.. picks up where the other leaves off-

A song that always relaxes and calms me down is "Any Other Name" by Thomas Newman.

Amos Lee is amazing for relaxing and definitely my favorite along with James Morrison. :)

Brian Eno's Music for Airports might be a little too chill for your purposes, but I certainly love it and find it very relaxing.

I have a recording of the Bach Cello suites played on Double Bass by bassist Mark Bernat. It's pretty awesome.

Nick Drake--I have Way to Blue, which is a compilation album.

Peter Gabriel's Passion, which is the soundtrack to The Last Temptation of Christ

Certain REM, like Murmur or Automatic for the People

Soundtrack to Nenette et Boni by the Tindersticks

Exlposions in the Sky....They are the background to the "How Bad Do You Want It?" Video that is a huge hit for motivation. The music without the monologue is very relaxing, especially for walking.

Nice list! Some I love, and some I need to check out. Thanks! (Listening right now to "June Hymn" from the Decemberists) 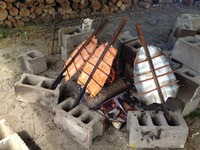 All those warm nights at Ravinia bring back memories of Oscar Peterson and Bruce Hornsby pouring out their lyric piano lines...no particular song, just a primal flow...Night Train is a good Peterson album...

Dead Can Dance has a nice collection...

...as well as solo works from Brendan Perry.

Jessica Curry - I Have Begun my Ascent

That may actually be a bit TOO relaxing for a walk. Perhaps some psybient music? A la Aes Dana or Shpongle? Pretty far from Sting, but also not the whale calls.

I'm on Fire. Very remniscent of "fields of gold" but with a great female lead