Home for a visit, and dealing with eating Paleo in a very non-Paleo (but otherwise fairly healthy) family. My family is a little skeptical (especially of the carb levels, even though I'm not VLC by ANY means) but more curious than anything else. I feel like half our conversations revolve around "so, what does the Paleo diet say about [food]?" - but it's in a very interested and curious way, not confrontational or aggressive, and they seem interested in all the reasoning behind it.

That said, they're asking me all this while enjoying their bread. I don't think I'll be making any converts any time soon (in the same house, we also have my vegan sister, my wheat/canola farmer grandfather, and my father, who has high cholesterol and is eating according to the standard recommendations for that). But they're NOT being defensive or trying to push anything on me, or making a big deal out of it when I refuse the cake/peanut butter/ice cream/ketchup. They think it's kind of neat - it's almost the same way you'd treat a relative who had a really off-the-wall but interesting job like a circus trapeze artist. Like the "I'd never do it because [xyz] but tell me all about it" attitude.

So...anyone else have some NON horror stories to share? Or relatives who were more cautiously interested than downright hostile?

good for him. very rare for teenagers to take responsibility for their own health, especially when it comes to food.

+1 for recognizing the need to slap past-self. Same here! :)

My sister saw me last year for the first time in 3 years. She's 18 months younger and was carrying about 30 pounds too much. I counted her having 4 Cokes one day!

I'd mentioned going Primal on FaceBook and we had a couple of conversations about my diet.

I think seeing me in a bikini was the final straw, lol (we were sunning on my parent's patio.)

She figured out that more exercise wasn't going to work. She finally got the Primal Blueprint & the PB Cookbook and is on board to change some habits this summer.

My parents are on board 100%. They have watched my weight drop, my skin clear, and they called me and asked " so what do you eat". I sent them recipies, and a shopping list and they were in like FLYNN.

My mom listens to me, when I send her e-mails, and seems to appreciate that I'm doing something good for me. I'm not sure about her eating habits, because she lives with a friend, but when we go shopping together she buys a lot of pastries. I'm glad she listens, though I wish she would try eating less snacky food. I know it's not my business, but she has a lot of health problems that I think she could improve by eating a better diet, with whole foods.

My dad thought I was 'going crazy' at first, because I got a little obsessed with being 'perfect' and probably came across as harsh about food, for a month or two, but he's agreed to eat more meat and veggies and less bread. He's also started using less sugar in his tea (it used to pass for syrup) and drinking less soda. Luckily he was never big too big on processed foods, just the bread, added sugar in tea, and soda, so we're working on that. He used to try and get me to eat meat and fat, when I thought no-fat, no-meat was good for me, so I think he probably feels a little vindicated by my eating change.

My boyfriend, who's over here most of the time, thinks it's quirky and cute, and enjoys the food I cook. I make him French toast, or waffles, sometimes, and I'm just happy he likes to have me make him food. He asks for meat, and vegetables, a lot, so it'd be silly for me to worry about some waffles.

Actually, now that I think about it, any resistance someone had to my eating changes, was probably due to me pushing too much, and having a superior attitude. I don't, anymore, but when I think about some of the things I said, that I thought were helping, I kind of want to smack my past-self.

+1 for recognizing the need to slap past-self. Same here! :)

My mom gave me a neutral reaction. I started off with the whole processed foods spiel, saying that...well, back in the day, we survived quite well off of not eating stuff out of boxes and the like. She totally approved - "yeah, right, processed food is bad!"

Unfortunately, she still eats like that(although all my life, we've always had a meat and veggie for dinner, with mac&cheese or peas or corn or something like that), and I hate the fact that after being introduced to this way of living, I can fairly well predict that if she has pizza the night before, her mood is more often than not bitch-status the next morning... Oh well. Both parents are very happy I'm cooking and living for myself pretty much. I'd love it if they followed suit.

I woke up my two sons. They are internet-wise, so after I reported in about my new diet and they saw me look healthier and climb some mountains in Hawaii like a goat, they checked it out and are now paleo-ing themselves.

Also others who are not exactly "family". They try it and find they feel much better, that long-term minor "ailments"have disappeared.

After trying for about 8 years to figure out why I feel awful, any step in the right direction, where results are obvious, I usually get a big thumbs up from my mom! The rest of my family thinks its all weird and don't really get it.

Yes. I'm a college student who went bonkers on this stuff in my junior year of high school and my parents (also CrossFitters at the time) jumped right on board. Now my mother is quite the paleo/primal/real food/whateverthehellyouwanttocallit chef. Pork spare ribs, coleslaw, and sweet potato fries in the works as I type.

My 15 year old son decided to try out paleo in the hopes of getting rid of his acne. I had "lovingly mentioned" the fact that eliminating dairy would probably help. In a matter of just a few days his acne was noticeably better. He then began to notice that overall he felt better by avoiding grains and refined added sugar. For a solid 3 weeks he was extremely strick paleo. I told him that it was ok to be less than 100% because it became very challenging. However, three months later he still is roughly 90/10 compliant. I am very proud of him because he sees and feels for himself how much better he feels and looks. In addition, several of the children of my friends (recent paleo converts) are asking him for advice about what to eat and he rather enjoys being the "health food expert" among his peer group.

good for him. very rare for teenagers to take responsibility for their own health, especially when it comes to food.

The only trouble I have with parents is what oil to use. They eat pretty well, meat + veg + starch. Whole food for the most part. But, they're still afraid of saturated fat. I'd like coconut oil, they want canola. We usually compromise on olive oil, sometimes butter. 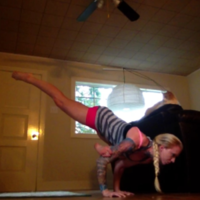 My mom was the pinnacle of all SAD eaters; giant wheat belly with skinny legs, moody disposition, excema from dairy and other allergens, etc.

Originally I went from SAD to veganism and had a great transformation, lost quite a bit of weight, so I encouraged my mom to try with me but she thought my diet was extreme... One vegan year later I was still on the smaller side but completely 'skinny fat', being a vegan ravaged me of muscle.

I switched to a Paleo diet thanks to my ND and Robb Wolf (I loved his videos)... I always had a belly bloat from being vegan (lots of grains) and now its completely flat! I eat loads of fat (yum chicken skin) and am never hungry! I used to get straight up HANGRY (hungry + angry) as a vegan haha...My mom is dumbfounded by my change and has jumped right on the wagon with me... I was completely shocked because she was the type who'd eat ice cream for dinner.. Now she drinks almond milk and is thinking of buying organic meats (big deal for this cosco shopper haha).. LOVE paleo

A lot of average (non-paleo) parents feel protein is important, for themselves and their kids. So if you say you're eating meat and vegetables, and going easy on the bread (which again people often have learned is a problem for the waistline), they're all over it. Not that they want to switch to it because it's "too hard" (ie their addicted to junk), but the way I eat is pretty much recognized by everybody I know as healthful. The major concerns I get are that I'm tending toward orthorexia (using our vocabulary, not theirs), but anybody who knows how LITTLE I obsess about sugar, wheat, etc, wouldn't have that concern.